1. So the evening of Christmas Day saw us take a trip to the emergency room because Ian was having severe pain in his ear and jaw – meds weren’t helping and it was getting steadily worse. This is the guy who doesn’t really like to go the doctor, so the fact that he opted for the ER when the urgent care center was closed told me it was pretty bad. But they couldn’t figure out what it was. They couldn’t find evidence of an infection or anything, but they gave him a generic prescription for antibiotics and told him if it didn’t go away in 3 days to fill that. Useful, right? Well, then the next morning he wakes me up at 5am to tell me he’s now got red bumps/a rash on top of the still increasing throbbing pain, so it’s trip #2 to the ER. And it turns out that he has shingles. I’ve had chicken pox, so I’m not in super danger of catching it, but I’m still relegated to the guest room until it clears up. Meanwhile I fetch soup and try to be quiet around the house because that boy is sleeping a LOT (doc told him to take off work for a few days until he’s not contagious). Hopefully we’ll see the signs that means it’s no longer contagious over the weekend, otherwise the New Years shindig we had planned is going to get nixed. Poor guy is still in a lot of pain, though, despite the meds. He says it’s the worst pain he’s ever felt in his life. Shingles in no joke, guys.

2. On a happier note, there were lots of cooking adventures over Christmas. I made a 4-layer tiered red velvet cake (all by myself, first time ever!) for Ian’s grandma, who had a birthday a few days before Christmas. It was tasty and everyone was super-impressed with my cake skillz. Ha. But witness: 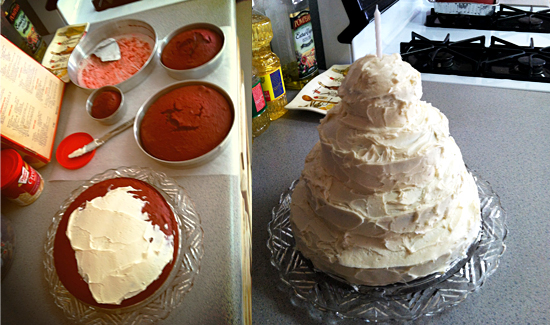 It’s not the prettiest frosting job in the world, but who cares! Tall and tasty. 😀

3. Since a lot of his family’s Christmas traditions center around food, the rest of the cooking adventures were with his mom at the helm. We made pork tamales from scratch (which is a crazy, involved, 2-day process, by the by), a Swedish breakfast dish called flaskpannkaka (literally ‘flesh pancake’ – appetizing, right?), and his family’s special recipe for pastitsio (a kind of Greek lasagna). That was just for 3 meals. Add on normal breakfast and lunches, and it was like a never-ending cycle of doing dishes around here. I’m pretty sure I was running the dishwasher at least once daily and sometimes twice a day. I think if we host Christmas again, I’m going to push for more eating out, and invest in some festive paper plates. I’m not even kidding.

4. We also went and saw The Hobbit, which I was pleasantly surprised by. I’m still a tad annoyed they’re breaking it up into 3 movies, but I think I liked it better than any of the LOTR movies. Mainly due to the lack of creepy Elijah Wood (not a fan). But I also like the actor playing Bilbo quite a bit, and the add-ins to show some of the history behind events was interesting. And is it just me or is Thorin kind of hot? I know he’s a dwarf and all but sheesh – did you see the flowing locks? Haha. Now I’m just waiting for Ian to get healthy again so we can go see Les Mis (and that wait is killing me, in case you were wondering).

5. There’s a running tradition where I buy ridiculous Christmas costumes for my sister’s dogs. Levi (Sienna’s daddy) in particular hates it – he just freezes and looks glum once it’s on. But it’s just so funny. And so I leave you with this picture of this year’s outfits (reindeer suit for Levi, elf hat for Suri), courtesy of my sister and brother-in-law via phone: 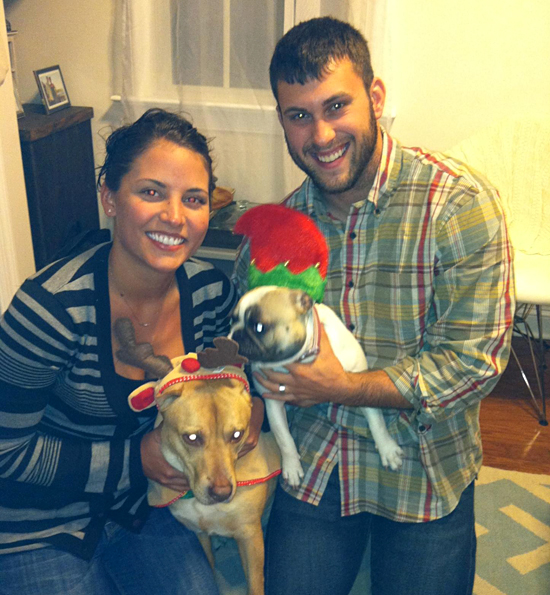 How did your Christmas week go?