A few weeks ago, a friend of mine had access to a laser cutting machine for a brief while and asked our little coffee group if anyone had anything they wanted cut out of wood or metal or plastic. I had a few ideas pop into my head, but this was at the front of the line. I ran it by him, picked out a plank of oak, and a few days later he dropped this off: 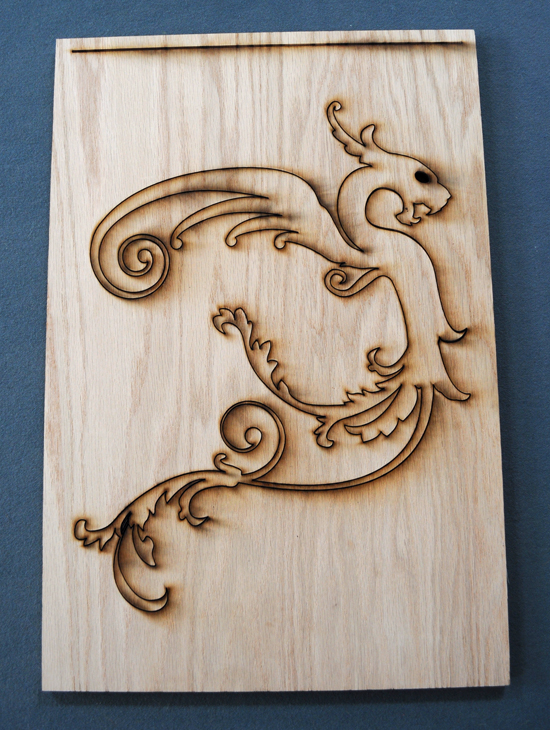 Yes! My dragon design in solid oak. He got a kick out of cutting out a dragon with a laser, and having it smoke around the edges from the wood. Apparently the process drew a bit of an audience. Check out the cool smoky patterns the laser left: 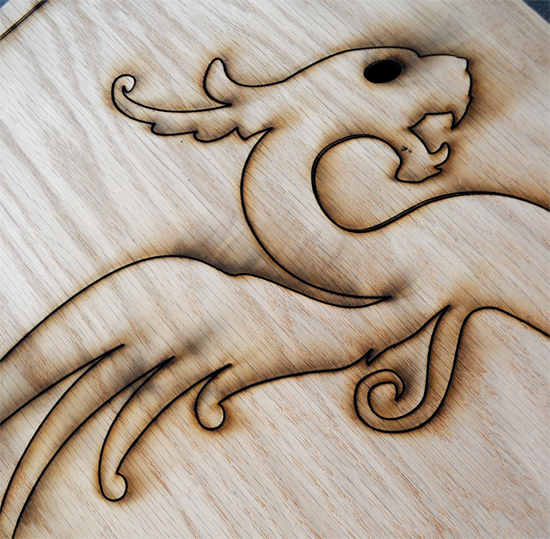 It took some doing to free the dragon from the background. It was half inch thick oak, and took several passes with the laser, and there were still some areas a little bit attached to each other. So I went at it with some wood carving tools leftover from college days and jimmied him free slowly but surely. It took several days because it turns out oak is pretty stubborn stuff, and there were hand cramps and blisters to contend with. But eventually, voila: 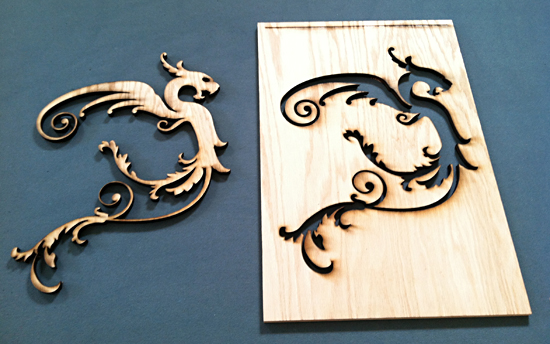 Then I had to decide what to do with it. Or them, because I hadn’t originally planned on doing anything with the leftover board, but it was pretty cool looking in its own right. Eventually I decided to stain them a nice reddish mahogany color (the wood stain’s official name is ‘Bombay Mahogany’), and back the board with some blue fabric leftover from these pillows so that color came through the dragon shape. Staining took awhile, with two coats each plus dry time. Then I super-glued on the piece of tail that had broken off in the process of freeing the dragon. Then I ironed and super-glued the fabric onto the back of the plank so the color showing through would be smooth and wrinkle free. I glued one edge first, then when that was dry, pulled and clamped the other edges to make sure it was taut. 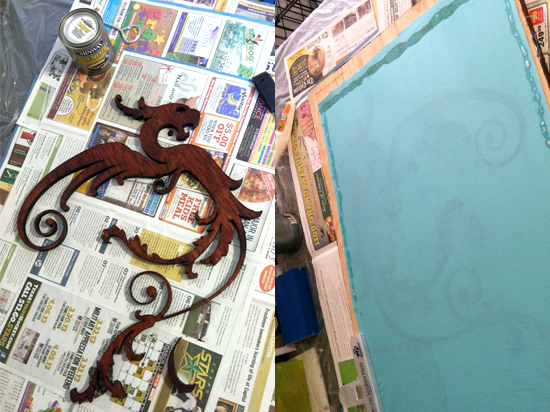 Then it was a simple matter of adding a sawtooth hook to the back of the plank, and hanging both pieces. The free-flying dragon is in my office, and the plank is in our guestroom (which has a blue and brown color scheme). I’m quite pleased with how they turned out!

I’m also glad I picked the half-inch thick oak instead of a thinner piece, even if it was a pain to jimmy, because I like the depth it gives against the wall. 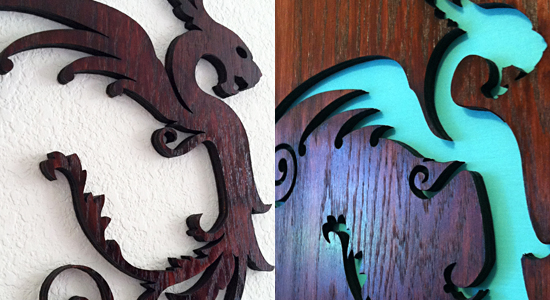 So, that’s the project that’s been taking over my craft table! Now it’s back to screen printing and attempts at sewing. 🙂

What kind of projects would you get up to if you had temporary access to a laser cutting machine?