Well, hi there! I know, I know… it got quiet on here for a little while. But I’m back! And never fear, books have still been devoured and enjoyed in the mean time. Here’s a few noteworthies I’ve read lately:

The Space Between the Stars by Anne Corlett.
Humanity has spread through the stars, but that doesn’t stop a virus from wiping out most of humanity. What happens when you’re maybe the only person left on your planet? The premise of this was promising, right at that crossroads for big ideas and human experience. And the human part played out well. I thought the characters were, for the most part, well-developed and real. There were some poignant moments and some achingly true inner thoughts and feelings. The plot is where this story lost ground. It started off strong, but eventually devolved into preaching about a person’s right to choose their own life. I don’t even disagree with that notion, but the repeated hammering of that got old quick. I thought the big ending of the plot was contrived and a bit obvious, but that the epilogue-like afterwards was nice. The writing style throughout, at least, was really well done and beautiful.
3.5/5 stars.

Akata Witch (#1) by Nnedi Okorafor.
This is a YA fantasy steeped in the culture and mythology of Nigeria. I’ll admit upfront I’m not too familiar with either of those, so it’s likely I missed some nuances or references along the way. That didn’t stop me from really enjoying this book. It’s the story of Sunny, a young girl who feels like she doesn’t fit in anywhere. Of Nigerian lineage, but born and raised in America, and an albino to boot, Sunny’s transition to living in her parents’ native land isn’t smooth. Especially when she sees something in a candle flame and learns exactly what she is. This leads her to a new group of friends, and a new world hidden behind the familiar one. It’s thrilling, but dangerous, and there’s more at stake than her and her friends know. The story is well-paced, and has the feeling of magical realism. There’s a lot of unexplained feelings and bits, so if you’re looking for everything to be spelled out for you, this isn’t your read. But if you’d like to step into a different kind of fantasy adventure, give this a try.
4/5 stars.

Mask of Shadows (#1) by Linsey Miller.
Sallot is the last living person from a destroyed homeland. Revenge is the name of the game, and the path to that is to win a position as one of the queen’s assassins. That means coming out on top in a literal battle to the death between the contenders. This book was ok. It was entertaining enough to keep me going, despite some drawbacks. I didn’t buy that Sallot – a thief with no training or previous inclination towards murder – would last a day in a competition of assassins. So right from the start, I’m not fully on board. Throw in some insta-love, positions named after gemstones, and knowing (of course!) how this book #1 will end, and it all felt a bit juvenile. Still, Sallot was an interesting character and the hints of world-building we get in book #1 could be built upon. The way the author handled gender fluidity was well-done, too. I’d be interested to see if this series and Sallot mature with book #2.
3/5 stars.

The Remnant Chronicles trilogy by Mary Pearson.
Three kingdoms hover on the brink of war. An arranged marriage between two of them would bring some much needed stability to the land. Except the princess wants no part of it. Nor does the 3rd kingdom. When Lia runs away on her wedding day, her intended prince and an unknown assassin are set to track her down. Add in magic, destiny, and the ever complicated workings of the human heart, and the stage is set for a YA fantasy adventure. The gimmick of book 1 annoyed me some. We have 3 narrators: the princess Lia, the prince, and the assassin. Lia is the only one whose name we know. When the other two show up in Lia’s narration, there’s the whole ‘which one is which?’ between the two young men. I call it a gimmick because it’s OBVIOUS. Happily, books 2 and 3 do not follow that pattern, and I was able to enjoy them much more. Overall, I quite liked this series. The characters are well done. With one glaring exception, they are complex and believable, and we see a good mix of humor, strength and mistakes from them. The plot is nicely segmented between each book and there’s a good build. I did feel the final battle/climax of the story happened a bit too easily and quickly, but aside from that these were a good read.
3.5/5 stars.

Apparently I was on a strong female lead kick. 😀 No apologies for that. Up next I’m digging into my pile of ARCs, and maybe finally bringing myself to read the final Fitz book (which I’ve been putting off because I don’t want that series to end).

What have you been reading lately? 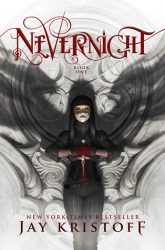 Nevernight (The Nevernight Chronicle #1) by Jay Kristoff. Girl’s family is killed. Girl narrowly escapes with her life. Girl ends up on the streets. Girl wants revenge, and is taken in by an old assassin and trained as his new protege in preparation for going to assassin school. Naturally. Then she has to find the school/temple of assassins, be admitted, learn all the things, and compete with her fellow trainees for a limited number of spots in the ranks of assassin proper. What could go wrong when you have a bunch of hormonal teenage assassins-in-training cooped up and pitted against […] 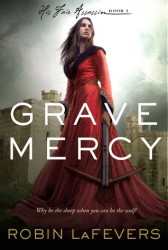 Grave Mercy (His Fair Assassin #1) by Robin LaFevers. If you’re looking for a blend of historical fiction, fantasy, intrigue and romance through a young adult filter, this book is for you. It’s the story of Ismae, a young girl in late 1400’s Brittany. Horribly scarred from birth, Ismae has always thought she was cursed. But after escaping an abusive arranged marriage, she is taken in by the nuns at the convent of St. Mortain. She discovers that her scars and certain other talents mark her as a daughter of St. Mortain (aka. the old world god of Death), and […]