What: 7-Day Alaska Cruise
Who: Me, the Boy & certain members of the Boy’s family

Our third port was Ketchikan. I think it was the largest of the Alaskan towns we saw. Here we abandoned all pretense of being rugged, outdoorsy types, and instead went all-out touristy. Our excursion for the day was a combo lumberjack show and totem pole collection tour. The lumberjack show was entertaining, if rigged. It was presented as a contest between two teams of lumberjacks – one from the US, one from Canada. Guess who won? Haha. They do some crazy things, though, and I for one would not want to be the guy who loses the log rolling contest. Brrr. The collection of totem poles was neat. We got a bit of the story behind each one, and a look inside a replica lodge house. This was another port where we had very little time outside of the excursion, so I don’t have much to say about the town. I was also developing a cold at this point, so that was fun…

Our last stop was in Canada, the beautiful city of Victoria, B.C. Apparently, if a ship is registered outside the US (as all cruise ships are; usually Panama), you have to make at least one international stop before returning to the US. Hence, a stop in Canada. This was a proper city, and it was CUTE! Quaint houses and modern houses, and everyone has a garden. We arrived in the early evening, and this was the briefest stop before heading back to Seattle. There weren’t a whole lot of choices for excursions due to the time limit, and we chose to go see Craigdarroch Castle. Prior to this cruise, I didn’t even know there were castles in Canada. This one was built by a Scottish family back in the late 1880’s. It was a bit odd, as the castle itself now sits smack dab in the middle of the suburbs. But the castle was gorgeous, full of lots of wood paneling and stained glass. And we got a bit of bus tour of the city on the way there and back, which was nice.


Then it was back to the ship to finish packing, and our last night on the boat. We docked in Seattle early the next morning, said goodbye to the boy’s family, and made our way back to Austin. The first thing I did when we left the Austin airport was take off my coat & sweatshirt, and bask in the heat. 🙂

If you missed the first two parts of the recap, find them here: Part 1: Ship & Sea | Part 2: Skagway & Juneau 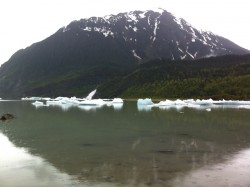 What: 7-Day Alaska Cruise Who: Me, the Boy & certain members of the Boy’s family Warning: this is a photo-heavy post. 🙂 Skagway Our first stop was in Skagway, and I have to say I was not prepared for the size of this port. All of my previous cruise experience was in the Caribbean, where all of the ports were bustling cities. Skagway is the teensy tiny remnants of a mining town. It is literally 21 blocks long by 7 blocks wide, and would not exist without the tourism provided by the cruise ships. It was also our longest port […] 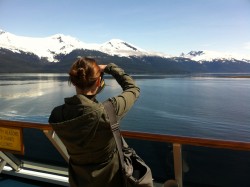 What: 7-day Alaskan Cruise Who: Me, the Boy, and certain members of the Boy’s Family Our first two and half days of the cruise were spent at sea, making our way from Seattle up to the northernmost point of our route. Unless you feel like gambling or shopping non-stop, there’s not a whole lot to do on the at-sea days until the evening when the shows start. So we had plenty of time to wander around the ship, get pictures of the passing scenery, and watch the world go by through the windows during the day. And gorge on all […]