Thanks to the boy’s satellite radio, I can actually instantly know the band for a song that catches my attention while we’re driving somewhere. This happened with Home by Dotan the other week, and I promptly bought the album it came from on iTunes when we got home. And it’s been on repeat since then. Here’s a few of my favorites from the album 7 Layers:

I checked out his previous album, too, but I think 7 Layers is better. 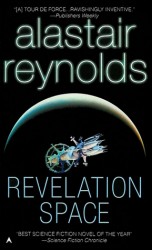 Revelation Space (Revelation Space #1) by Alastair Reynolds. This was recommended to me by a friend back in August, and I finally got around to reading it. It tells the story, mainly, of one Dan Sylveste, an interstellar scientist bent on figuring out what happened to the long-dead Amarantin alien race. Something destroyed them almost a million years ago, and Sylveste has the more-than-nagging suspicion humanity is in danger of the same. He’s up against not just the clock, but also a scientific community that has lost faith in him, a less-than-human starship crew that has its own agenda, an […]

Photo series of the week: Meet Garfi, the world’s angriest cat. Grumpy Cat has some new competition. Sending Love from a Lifeboat. One author’s love letter to the book that changed her life. “It matters to see yourself in a book. It matters to be told, either by the author in person or through a character, that you are okay. That not having a label doesn’t make you less worthy of love or a community. That you are defined more by what you love than what you hate.” Need a hug? Check out The Nicest Place on the Internet. Virtual […] 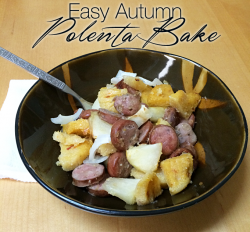 I was telling my mom about this recipe, and she was like polenta-what? It’s an ingredient that isn’t super widely known unless you’re Italian, but is becoming more popular. Polenta is a cornmeal based substitute for pasta, rice or potatoes. It’s got a mild corn flavor, and is much more palatable than grits. This recipe is one of the most fail-proof ways to ease yourself in to using polenta in your cooking. It’s a simple chop-toss-and-bake, but is super tasty. The sausage and apples make it perfect for autumn, too.

As promised yesterday, here is my new list of goals to (hopefully) accomplish before my next birthday. Take a vacation with just Ian (I’ve pretty much decided this will go on the list every year). Get to see my little sister. Create a lookbook for the screen printing shop. Query 6 local shops about stocking my work (breaking into wholesale!). Pay off my credit card debt. Open a retirement account. Make this blog responsive. Reach 200 sales in the screen printing shop, and 75 sales in the digital shop. Design a calendar for sale. Launch a digital papers section in […]

Well, as of around 5:30am this morning, Mississippi time*, I am officially 30 years old. Yup. The big 3-0. Three whole decades of life. Honestly, it doesn’t feel like that long, or that big of a deal (though that won’t stop me from milking this milestone birthday for all that it’s worth – hence 2-week staycation 😀 ). A birthday means lots of things, but here on the blog it means looking over the goals I set last year for things I wanted to accomplish before I turned 30. So here we go: Host 6 brunch gatherings. I hosted 5 […]

Your Definitive Argument For A Pet Friendly Office. Parrot Disappears for Four Years, Returns Home Fluent in Spanish. What Books Do for the Human Soul. You Can Have an Easy Life or an Awesome One. Choose Wisely. Can Opening an Online Shop Make You a Better Designer? 7 Reasons Your Clothes Look Cheap. In the 1960s women made up about 50% of computer programmers, so what happened? This looks delicious: Pumpkin Spice Pull-Apart Mini Bread. It’s basically a NOT blogging conference. TxSC returns for it’s final run, in a fun new format. Last week, I talked about The Problem With […]